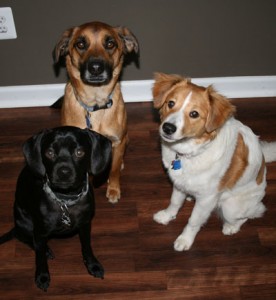 Has feeding homemade dog food improved the health of my dogs? If you want the short answer, it is a resounding YES! It has been 3 years since I decided to start making my own dog food… wow, time flies! I thought it was well past time to update everyone on how choosing a high quality dog food has helped my pets become healthier overall.

Just a quick disclaimer: I worked with my veterinarian and did a mountain of research before I decided on a diet that was right for my pets. I encourage you all to talk with your vet before trying home cooked dog food, or at the very least read Dr. Pitcairn’s Complete Guide to Natural Health for Dogs & Cats by Richard H. Pitcairn, DVM, PhD. 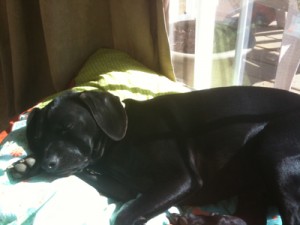 Barret was overweight and I didn’t even know it!

I didn’t know my dogs were overweight until I looked back at some old pictures. I can’t guarantee that your pets will slim down on a home cooked diet. No matter what you feed them, if you overfeed them, they’re still going to be fat. However, part of creating a dog food recipe is determining how many calories your pets should be eating. A combination of reduced caloric intake and eating only fresh whole foods have slimmed my guys down considerably. END_OF_DOCUMENT_TOKEN_TO_BE_REPLACED

Obesity in pets is becoming an epidemic and is a top health concern for pets according to veterinarians. It is estimated that 54 million cats and 34 million dogs in the US are clinically obese. Many pet owners struggle with keeping their pets at an ideal weight…it’s hard to deny those puppy dog eyes and we just want our pets to be happy, right, so why can’t they have a few extra treats if they want them? Unfortunately, a few extra pounds can be detrimental. The excess weight on our pets can cause a variety of other health problems, the same way obesity can have adverse effects on human health.  A few extra pounds on a dog may not seem like anything to worry about, but the added weight can exacerbate arthritis, cause joint and bone issues, and it can greatly increase the possibility that your pet will develop diabetes or cardiac/respiratory disease. Thier immune systems can be diminished, making their ability to fight off other illnesses and disease.  It’s best to learn how to prevent pet obesity before weight related complications arise, because even if your pet loses weight, the damage may be irreversible. END_OF_DOCUMENT_TOKEN_TO_BE_REPLACED 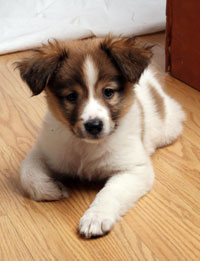 My little girl Sara weeks after we brought her home

As we enter the cold and flu season for humans, we can sometimes forget that our pets can become sick, too. Canine influenza has become more and more prevalent over the past few years and can be devastating to some of our companions. So what is a loving pet owner to do? How can you boost your dog or cat’s immune system? With just a few simple changes in diet and behavior can build your pet’s immunity and general wellness. END_OF_DOCUMENT_TOKEN_TO_BE_REPLACED

Doggie Diets – How Homemade Pet Food is Worth the Effort

A couple of months ago I switched my dogs’ & cats’ diets to a homemade one. Every Saturday I spend an hour or two in the kitchen cooking brown rice, vegetables, chicken, and various giblets. I measure vitamin supplements with care.  Every week is the same: I cook, measure, mix, puree (for the cats), and generally stink up my house. I was beginning to wonder if it was all worth it. Sure, making homemade food is less expensive than buying a quality dog food that passed my rigorous inspection of the ingredients and nutritional content, but was it really worth all the effort?

In short, yes, I would say it is totally worth the effort. First of all, I know exactly what is in the food that I feed my animals. I know that the mean they are eating is a quality cut and that they are getting every bit of nutrition that they need. In the last few weeks I’ve noticed a lot of changes that justifies (to me) all the effort I put in to making my pets’ meals. The first changes I noticed were a reduced number of bowel movements, which were a smaller and a lot less offensive smelling. The dogs smelled better and needed bathed less frequently. Among other improvements I noticed Gatsby’s fur becoming less greasy and straw-like and much softer with less shedding. Who can complain about less shedding?

The cats didn’t take to their new food as well as I had hoped. They still prefer dry cat food. I switched them to a higher quality brand of cat food and continually try to supplement their food with fresh meat, fish and greens. Their fur is much softer, though they still shed enough hair to create a new animal every week or so!

In Part 1, I explained how to choose a quality dog food from the plethora of brands and flavors on the market. The alternative to commercial diets is creating and preparing your pet’s food at home. This option has gained popularity in recent years with the contamination scares and movements to improve our own diet and health. 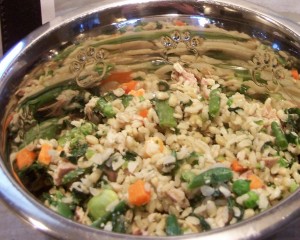 Before the invention of dog food, household pets were fed “people food”. These types of diets worked because they were as varied and nutritious as their owner’s diets, and foods were not filled with preservatives and other impossible to pronounce ingredients. We are now starting to see more disease, allergies, and illness in our pets, and it could have something to do with the quality of the food we are feeding our animals. I like to imagine how I feel when I’ve eaten badly for a few days – say nothing but pizza, chips, & soda. I feel run down and sluggish, my immune system is craving vitamins and nutrients that junk foods don’t provide. A diet like that can be compared to feeding a low quality pet food. Imagine going your whole life on nothing but junk food and preservatives. Thankfully, the pet food industry is following suit and has steadily been improving their offerings. END_OF_DOCUMENT_TOKEN_TO_BE_REPLACED 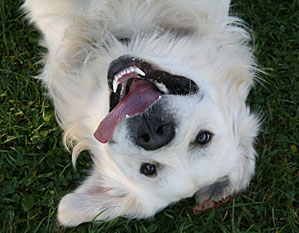 Commercial Dog food was first developed in the mid 1800’s and the pet food industry has grown by leaps and bounds ever since. With all the varieties, brands, and marketing messages being tossed around, it is sometimes difficult to know if you are selecting the right food for your pet. Selecting a quality pet food is essential for the health of your dog, and a balanced diet and regular exercise are the foundations for a healthy, happy pet. A quality diet can help prevent disease, alleviate allergies, END_OF_DOCUMENT_TOKEN_TO_BE_REPLACED