Pet Surgery | Products that help with after surgery care 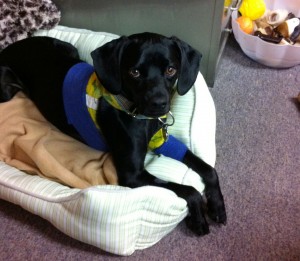 Barret a few days after surgery

This is a follow-up post about Barret’s tumor removal surgery. You can read more about my struggle with the anxiety of finding a lump and learning that it may or may not be cancer in my previous post.

I dropped Barret off at the vet last Wednesday for his pet surgery. He was happy as a lark as they lead him to the back. I was a nervous wreck. They said they’d call when he woke up. It turned out the surgery that was supposed to be a simple cyst removal turned into a very long and arduous procedure. They ended up keeping him overnight. The minute he was ready to be picked up I was there. 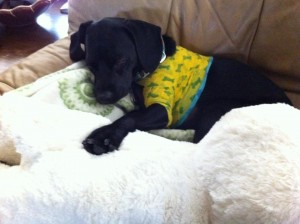 Sleeping off his pain medication

I wasn’t prepared to see him all wrapped up in colorful vetrap, but there he was trotting towards me with his usual energy. He was bouncing away trying to give me kisses as the vet explained he needed to stay calm and inactive for the wound in his armpit to heal. He wished me luck and had me make follow up appointments.

After surgery care for my dog was pretty simple, but there were a few items that my doggie first aid kit was lacking and there are a few extra items that I bought or already had that proved to be invaluable during this process and I would like to share those with you so you might be more prepared than I was.

Infection is always a concern with surgery. Barret was not prescribed any antibiotics, so keeping his wound free of harmful bacteria was my first priority. Vetericyn is a spray that is non-toxic on all animals, so it is great to have around the house for cuts, burns, stings, and any other minor injury to promote healing.

It is simple to use, too. Just spray it onto the surgical site or saturate the dressing you’re using if the wound is covered. It is antibiotic free and steroid free, and made in the U.S.A . You can use it pretty much anywhere and is still safe if your pet licks some of it off. I personally feel using this product helped his difficult wound stay clean and heal quickly.

I actually have a first aid bag at home for the dogs. I put one together after I went to a pet CPR and first aid seminar. What I didn’t have was any non-stick pads. Those are essential if you don’t want the scabs to come off each time you change the dressing. They’re absorbent too so they absorb all the discharge and little bit of blood that does escape around the staples.

I had vetrap (a wrap that only sticks to itself and not hair, skin or the wound, you can also use self-adhesive ace bandages at your drugstore) and rolled gauze, however I only had one or two rolls of each. That may have been OK if it was really just for a temporary first aid fix until I could get to the vet, but I needed lots more. 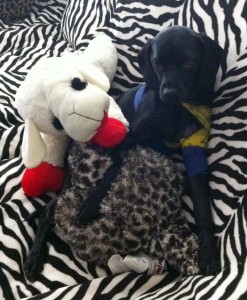 Barret resting with his pillows and Lamb Chop

Barret is a wiry dog. He is constantly at your side, bouncing around for your attention. This is not great behavior for a dog recovering from surgery. Even with the pain medications we were giving him, he did not stop this behavior.

I bought a calming agent because I didn’t know what else to try! I’ll admit I am very skeptical of holistic treatments like this (because none of the other supplements, like Valerian root ever worked for me), but honestly this calms my dogs. I even gave it to Gatsby, my fearful dog, during a thunderstorm and it calmed him like no other OTC treatment we’ve tried before. I’ll always have this on from now on.

I bought a couple of big fluffy dog toys (Barret likes to snuggle with them). They’ve been helping me prop him up and make him comfortable while he lies in bed or on the couch. Plus, Lamb Chop is so cute! The Cone of Shame

I didn’t have a cone of shame, otherwise known as an E-collar, in my first aid bag, but I needed one. I bought a hard plastic one recommended by the vet, but I ended up buying an inflatable cloud collar later on because he kept banging into my shins with the hard plastic one! He also seemed much more comfortable with what looked like a travel pillow around his neck. I wish I had had one before I needed it.

Once the wound stopped weeping, we were able to take of the bandage for good. Putting him in a dog t-shirt helped keep the wound clear and prevented him from licking it or chewing at the incision when we wasn’t wearing the cone of shame.

No one is ever 100% prepared for anything, but having these few items on hand before I brought him home would have saved me a few dollars and a few trips to the store!

Previous: Choosing the Right Dog Bowl for Your Dog
Next: Dog Cancer: What to do when your dog has cancer