Home | Dogs | Working Dogs | What does it take to become a Police Dog?

What does it take to become a Police Dog? 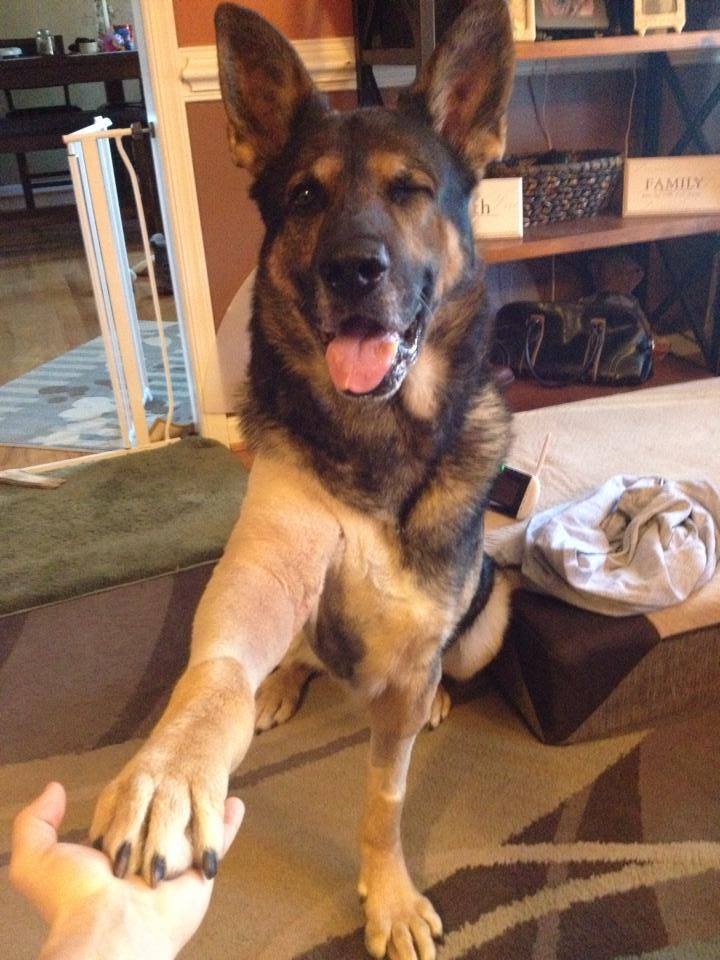 We’ve had some really heart-breaking stories of the loyalty of police officers in the news the last few months. K-9 officer Kota showed her heroic loyalty to her person when, after she fell through an attic crawlspace, she returned to the suspects and her person to help finish the arrest despite a broken leg!

Kota has since recovered from surgery, but it prompted me to remember my Aunt’s police dog, Andor. Andor was bred specifically for his job, to sniff out drugs. He was fiercely loyal to my aunt and watched her back, for which I am grateful for every day.

I was very young when my aunt brought him home from his training in Texas, but I remember the training was described as “intense” and took almost a full two year to complete!

Please welcome Kerry Moloney with a guest post about how police dogs are bred or selected, trained and used:

Police dogs are normally bred specifically for the job, but sometimes public dogs are accepted in to the pack to become part of a crime-stopping squad. Police dogs are vital in solving crimes including murder and drug trafficking and they are also crucial in calming and controlling public disorder.

Not all dogs have the innate ability to become a police dog, as it requires a certain natural instinct. The German Shepherd is the most common breed for police dogs, but other dog breeds include Belgian Malinois Shepherds, Dobermans, Rottweilers and Weimaraners.

To join the dog squad, there is a set of requirements that need to be met:

A police dog has to be healthy in every sense of the word. The dog doesn’t just have to be physically fit, but also mentally alert. They need to have the intelligence, willingness and drive to catch the criminal or pick up that vital piece of evidence for years to come.

Of course, fitness is a huge part of the job. The dog has to be fit enough to do a lot of walking and attacking (if needed) and will go through many different situations, which will vary in pace. They may have to go from a slow, quiet walk to an energetic sprint within a matter of seconds.

A police dog can be of either sex yet, whether the dog is male or female, there is one weight limit for all and that is generally between 55 and 70 lbs.

If the dogs are part of the breeding program, then they are generally brought into service between the ages of eight and twelve weeks. However, the unit often gets dogs that are a little older, or even full grown. They usually become fully operational in the job at around 2 or 3 years old. They usually work for around 5 or 7 years and take retirement at around 7-9 years old.

Sociability and ability to work with humans

Of course, there needs to be a great relationship between the dog and its handler. The dog needs to be able to be obedient and understand that they are doing a job. It can’t be scared to interact with humans, because the majority of their time will be spent with humans – whether that’s its handler or criminals. A police dog cannot be scared to leap on a criminal if needs be. The dog must have a courageous manner and enough physical strength to intimidate. This is why German Shepherds are often used as police dogs, as they are courageous by nature. [editor’s note: Well, not all… My German Shepherd is pretty cowardly by nature J ]

Instinct for predation, play and hunting

A police dog has to want to find things and hunt. Some dogs would prefer to lounge in front of the fire, which isn’t going to cut it in the force.

Assess your dog’s personality, nature, and health – then ask yourself, would he have made a good police K-9? Let us know in the comments!

2014-01-24
hcrotsley
Previous: Brace Yourselves (and your pets) for Record-Breaking Low Temperatures!
Next: Should I give a Vitamin B12 supplement to my dog?