Proper Interaction Between Kids and Dogs

Petbehavior.org‘s Topic of the Month for May is Training Your Child To Be Pet “Wise.”  Their message is that you should start teaching your children how to interact with your pets as soon as they can become mobile.  Our youngsters have no idea that their tugs, pulls, pinches and smacks are painful and can hurt our dogs.

If this is left unchecked, our dogs can suffer from high levels of stress and may even react by biting.  They advocate proper correction from the start is the best way to curtail these actions and even recommend separating your pet from your kids until proper behavior can be demonstrated. 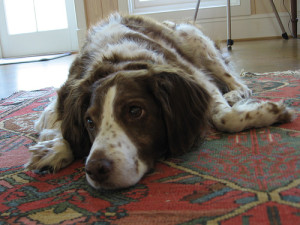 Adding a Dog to the Home

A few years ago we bought our first house.  Since we already had kids, we thought getting a dog was a great way to round out our new home.  We already had two cats…but cats are cats and they never exactly warmed up to any of our kids.  But the kids sure did try and had scratches to prove it.

We naturally thought a dog would be different.  And he has been.  Since we picked out our dog, he has been a fun part of the household and he gets along with everyone.  Well, except the cats.

But getting back to PetBehavior’s topic, I think we were able to quickly get through to each of our kids that hitting the dog was bad.  Our two boys only batted at him a few times before our correcting got through to them.  And I can’t even really recall our youngest girl ever taking liberty with him.

The one problem that we run into on occasion is that our two boys have trouble understanding the difference between playing with each other and playing with the dog.

One of their favorite play activities with the dog is to take one of his chew toys and play keep away.  It’s one thing if it’s just them playing keep away with each other, but our dog isn’t as appreciative when it’s one of his toys.  They tuck the toys under their arms or close to their bellies and the only thing our dog can do to play is try to wrestle it from them.  This obviously leads to bites and scratches and every now and then it’s a little too hard and they end up crying.

So we try to impress upon them that that is not how dog’s play and he doesn’t quite understand that he is hurting them.  It’s working slowly, but I think we’ll get there soon.

The one interaction that we always found cute was one of our youngsters running over and giving our dog a big hug.  We thought it was something they would enjoy — and something the dog would appreciate.  Turns out we might have been wrong the whole time.

An interesting theory gaining steam on the internet argues that you should prevent your kids from hugging your dog.  Sounds crazy, right?

The basis of the theory is that dogs are cursorial animals, meaning that they naturally predisposed to run from danger when needed.  And whenever we hug our dogs we are depriving or preventing them from that ability.  In some cases it can stress your dog to the point that they might bite.

Dr. Stanley Coren writes on PsychologyToday.com, that he found several sources that suggested reducing the chances your child suffers from a dog bite start with preventing them from hugging dogs.  They also found that the proximity of your child’s face to the dogs mouth during a hug greatly increased the chances of being bitten. 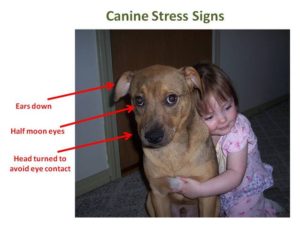 Intrigued, Dr. Coren decided to test the theory.  He collected a random sample of 250 pictures posted to the internet that show a child hugging a dog.  He then looked at the dogs for signs of stress.  He lists signs of stress that can include baring teeth, lowered ears slicked back against the head, submissive eye closure or partial eye closure, avoiding eye contact and lip licking.

Coren found in the pictures he reviewed, 81.6% of dogs showed at least one sign of discomfort, stress or anxiety.  He found that only 7.6 % showed comfort in being hugged and the remaining 10.8% were neutral or ambiguous.  That’s pretty striking.

One thing that Cohen found troubling about his study was that he feels the pictures people post to the internet are the ones they feel show the dogs and their children at their happiest.  If such a high percentage of these photos show dogs under stress, he fears that the owners are not recognizing these signs and, if left unchecked, it could lead to stress and bites.

After reading both articles, I think the thing we can take away is to do a better job of observing our dogs and watching for these signs of stress.  As we try to teach our kids to better interact with our dog, hopefully we can catch any of these signs and prevent something bad from happening.

2016-05-02
thatpetblog
Previous: Spring Fever – Fun Ways to Include Your Pet in Your Wedding Planning
Next: How to Greet a Dog