Home | Exotic Pets | Virginia and Short-Tailed Opossums as Pets, with Notes on Heidi, a Cross-Eyed Star

Virginia and Short-Tailed Opossums as Pets, with Notes on Heidi, a Cross-Eyed Star A Virginia or North American Opossum, Didelphis virginiana, purchased from a fur farm for $5.00, was my first “large” wild animal pet.  I’ve since raised many orphaned youngsters, several of which became tame enough to use in educational programs.  So I’ve always had an affinity for North America’s only marsupial…but my enthusiasm is not shared by many.  I was, therefore, greatly surprised by the recent fame of a cross-eyed Opossum named Heidi, who resides in Germany’s Leipzig Zoo.

Heidi’s journey to the zoo is interesting in and of itself – orphaned in North Carolina, she was reared at a nature center and eventually found her way to a zoo in Denmark, and from there to Germany.  But the key to her popularity is the appealing look of a face dominated by “unique eyes”.

Here in the US, people usually deride Opossums as “giant rats” and are horrified to have them as neighbors; even biologists tend to write them off as “primitive”.  But Europe, and now the world, has embraced Heidi – her Facebook page has over 100,000 followers, and she has inspired recorded songs and a line of toys!  Surprising, but I say anything that encourages people to care about animals is positive!

Truth be told, Virginia Opossums do not make the most responsive of pets.  Much time and effort is needed to habituate them to people, and captives soon realize that biting is more effective than “playing dead” when it comes to discouraging annoying owners!  Bottle-raised kits, available from a few breeders, are the best option (check state laws).

You can also gain Opossum experience by becoming a wildlife rehabilitator (please see article below).  Virginia Opossums are thriving – originating in Central America, they now range to Canada – but they are very “accident-prone”.  Dogs, cars and curious children assure that rehabilitators are kept busy with needy youngsters each spring.

The easiest way to enjoy Opossums is to feed free-ranging individuals.  They are not hard to find – while working as a nuisance wildlife trapper, I caught many in Manhattan (the East Village was especially good “habitat”)!

Opossums take readily to free handouts, with almost nothing being rejected.  A huge female appears in my Long Island, NY yard nearly every night, where she enjoys leftover yams, fruit and the occasional peanut butter sandwich.

Sugar Gliders and other Australians

Distantly related to the Virginia Opossum and its 60+ Latin American cousins, several of Australia and New Guinea’s 20+ Possums are established in the pet trade.

Most folks are surprised to learn that the most popular of these, the Sugar Glider, Petaurus breviceps, is a pouch-bearing Possum and not a Flying Squirrel relative (please see article below).

South America’s chief contribution to the pet trade is the Short-Tailed Opossum, Monodelphis domestica.  This little fellow is dubbed the “House Opossum” in some regions, as it readily takes up residence in homes, where it’s fondness for insects and small snakes is sometimes appreciated.  Those I’ve kept tamed down easily; they are important lab animals as well.

The 4-inch-long Mouse Opossums, Marmosa elegans, under my care in various zoos were a delight to observe, but efforts to establish them in the pet trade have not been very successful.

News Release with photos and videos of Heidi

2011-03-09
findiviglio
Previous: The Mongolian Gerbil’s Unusual Breeding and Social Behavior
Next: A Home Away From Home – Foster Care Organizations for Pets of Deployed Military Personnel 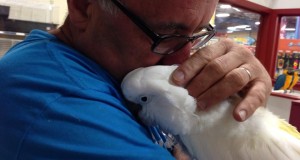